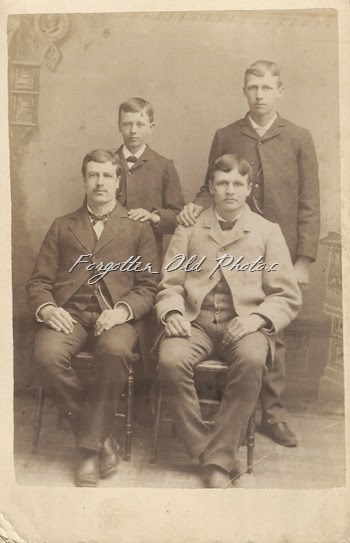 Hays City Kans
Taken April 27 – ??  maybe 87
Staines  Stainer Bros
The one button being buttoned on the suit jacket was used extensively by photographers  from the 1860’s then again in the 1870’s into the late 1880’s.  This cabinet card has rounded edges that were popular 1889 to 1896.
Thanks for stopping by.

Update from Iggy:
Andrew Stainer's parents were Anton and Mary. Andrew was born November 10 1857 in Wisconsin and he died June 21 1919 in Ohio and he was buried in Kansas The brothers I found were William and Theodore.Andrew married Elizabeth

Here, that was in the Wisconsin State Census of 1905. The couple with four daughters is living in Port Washington City, Ozaukee. William A. Stainer is working as a miller. His parents are stated to be born in Germany, her parents in Switzerland.The 4 daughters:Ursula 15 years, *abt. 1890Betty 12 years, *abt. 1893Marie 9 years, *abt. 1896Irene 7 years, *abt. 1898

In the 1920 Census Willaim A. Stainer, widower, is still living in Port Washington, Ozaukee, Wisconsin. In his household are the two daughters Bettie, age 27, and Marie, age 24

From Iggy:  The smallest boy may be Monroe A. Stainer Andrews son.  He has his hand on his Dads shoulder