This is a wedding photograph from the antique shop in Detroit Lakes Minnesota. 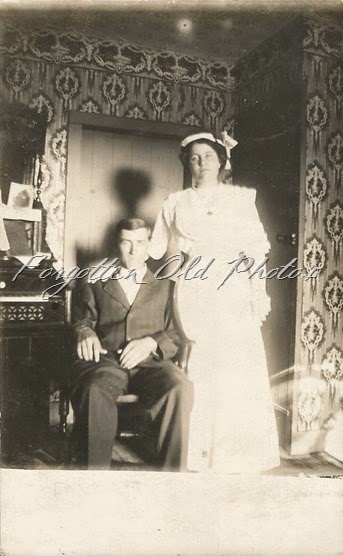 They got married in someone’s home.  Perhaps the home of the bride. 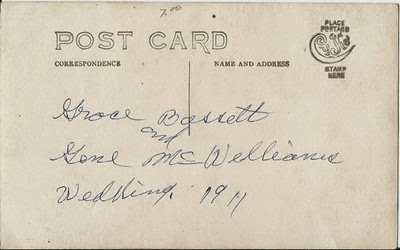 Grace Bassett and Gene Mc Welliams Wedding 1911
Thanks for stopping by.  Do come again.

Update from Iggy:
The Iowa, Select Marriages, 1809-1992 about Eugene Mcwilliams says Eugene Mcwilliams, born in Harrison Co., having parents A. W. Mcwilliams and Margaret Kirkle, married Edna Grace Bassett on 7 Jun 1911 in Harrison County, Iowa. In subsequent census records, Grace is noted as Edna.Eugene H McWilliams (7 Nov 1889 in Iowa - ?)Edna Grace Basset (Jan 1884 in Iowa - ?)In 1920, the couple os living in Randolph, Cedar, Nebraska and have two daughters, Ula and Mabel. Ula married Lloyd Wesley BowersSometime before 1930, Edna Grace married John M Holt and the two daughters are with her in Ute, Monona, Iowa where she lived in 1930 and 1940.
Ula married Lloyd Wesley Bowers
Posted by Far Side of Fifty at 4:04 AM