This is a wedding photo from the antique shop in Duluth Minnesota.  The photographer is Johnson Studio. 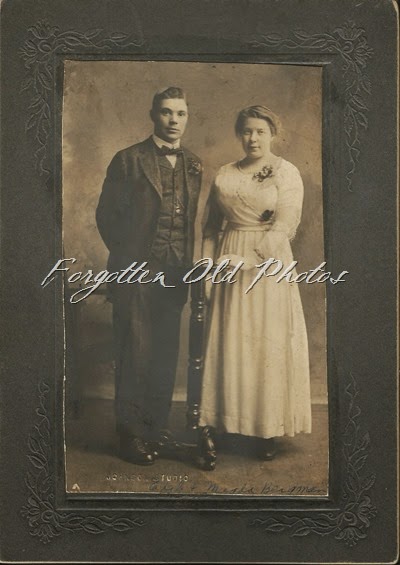 Erik and Magda Bergman  Magda is most likely short for Magdalena.

The photo was most likely taken around 1920-1925. Hemlines started to rise in the 1920’s, and a dress neckline that showed your throat was acceptable.

Update from Iggy:
Erik Bergman (abt 1891 in Finland) and Magda J Soderstrom (abt 1898 in Sweden) are listed in the 1920 US Census living in Washburn, Bayfield, Wisconsin. They had a daughter who's married name was Ruth A. Durr (19 Jul 1916 - Mar 1992 in Chicago)Erik disappears before the 1930 US Census, Magda remarried an Oscar G Johnson (and later/or Oscar Berglund) Erik  died in 1925. He worked as a laborer in a box making factory.

From Jacqi:
There was a 1920 census entry for an Eric Bergman, married to Magda J. Bergman, with a three year old daughter Ruth. He was born in Finland about 1891 and came to this country in 1909. But they lived in Washburn, Wisconsin.