This is a Cabinet Card from the antique shop in Moorhead Minnesota. 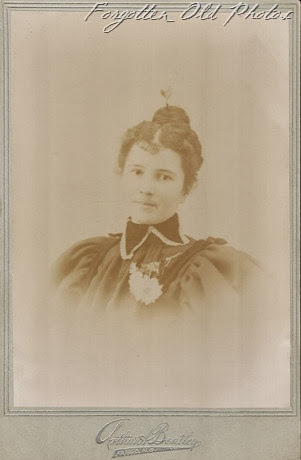 A lovely young lady with huge sleeves, a flower and an updo.
We also have a name. 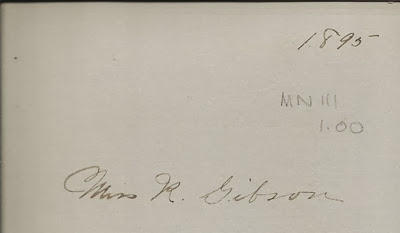 Miss R Gibson  1895
The date matches with the Photographer Arthur Bentley’s time in Fargo 1895 to 1900.
Thanks for stopping by.  Do come again:)
Update from Iggy:
Ruby Gibson (b. abt 1887 in Scotland) the daughter of Robert and Angela (Jenkins) Gibson - and if so, her sister was famous - Angela Murray Gibson. They lived in Fargo and Casselton ND.

In the newspaper article it states the Ruby was the older sister and Angela was the younger sister.  While her sister attended college Ruby worked at Herbst Clothing Store in Fargo, she had a gift for merchandising and Isaac Herbst helped her start her own store in Casselton ND called The Bee Hive Store.  She supported her sister financially with her film making efforts.  Her sister Angela was one of the first female motion picture directors.