Iggy located an address for family of this photo.  I didn’t hear anything back and one day noticed a friend of mine on Facebook had a friend with the same last name.  Yes, It was her father and his sister.  A photo that she didn’t know existed. 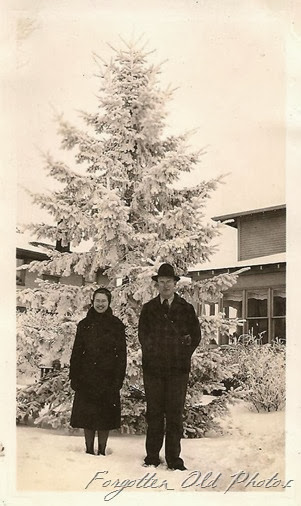 Laurie wrote this about her Father and shared  a bit of family history. .

He was an avid photographer, as was his father, a Norwegian immigrant, who came to our country in 1905. My grandpa Elinas Grotnes also loved movies, and shot films of he and my father building our Valhalla Resort starting in 1929. We enjoy looking at the the history and perpetuating it. I think the photo you have was when my father Len Grotnes, and his sister Evelyn were living in Detroit Lakes, during high school. He was born in 1921, so this photo must've been in his later teen years. Back then, if someone from the Island Lake/Toad/Shell Lake area wanted to graduate from HS, they had to live in town in Detroit Lakes and return home to the lake in the country each weekend, or whenever they could make it. My. Grandpa Elinas was a Norwegian Immigrant, WW1 veteran, whom while fighting in Nantes, France, was one of the soldiers who stumbled upon 'The Lost Battalion' and helped them fight their way out. Back then, they only had carrier pigeons to deliver the statistics of their well being, and now we have FB at the touch if our fingers. Humbling! My Grandmother was a Swedish immigrant American, and was a Red Cross RN in the battlefields of Nantes, France where she met my grandfather. I love their Love story!

Laurie was pleased and thankful to get the old photo. Thank you so much! My father and his sister in the photo have been gone for five years, now. My mom had never seen this picture of daddy, so it was a special joy for her, also.

We still have no idea who took all of these photos in the Miss M series.