This is a photo from the antique shop in Crookston Minnesota. 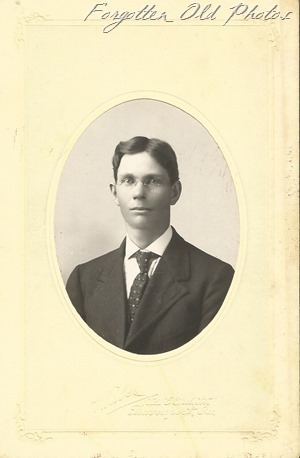 Wales is the photographer at 121E. 3rd St. Davenport Ia.

Gustav Henderson
I have always hoped to find a relative.  Possibly this is a cousin of my husband…who knows.  But Davenport is all the way across the State of Iowa from Logan Iowa where my husbands Great Grandparents settled…but you never know.
Thanks for stopping by.

Update from Debby and Roger:
My cousin Roger Agartsson in Sweden wanted me to add this to the blog for Gustav Henderson:His parents would be Karl Peter Henriksson b. May 3 1842 in Hällefors Örebro SwedenMaria Katrina Ersdotter b. Dec 17 1837 in Gåsbom Värmland Sweden.Their children are Bernhardina b. Dec 25 1868 in HälleforsKarl Johan b. July 19 1871 in HälleforsPer Gustaf b. May 10 1873 in HälleforsOskar Fredrik b. Jan 1 1875 in HälleforsThe family left Skålen Långnäs Hällefors for North America in June 1883. Hope this helps? Debby
Posted by Far Side of Fifty at 4:02 AM