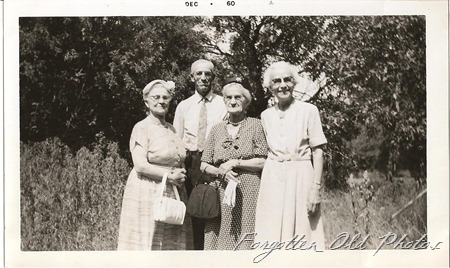 The photo was developed in December of 1960. My best guess is that Martha and Rose are visiting because they have their purses on their arms, and that Ray/Roy is their brother and he is married to Edna. ( They were brother and sister and lived together.) 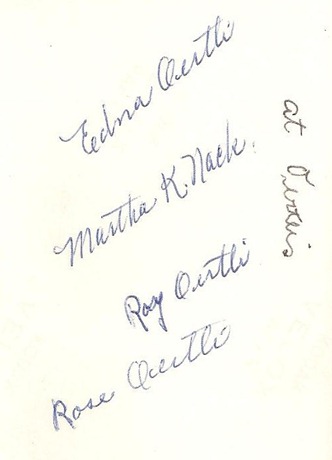 At Oertli’s  Edna Oertli,  Martha K.Nack,  Ray/Roy Oertli and  Rose Oertli
Thanks for stopping by.  Do come again:)
Update from Iggy:
Roy Oliver Young Oertli (b. 30 Jul 1894 - d. 13 Dec 1958), son of Arnold and Christina Oertli, lived in Aberdeen and later in Ordway, Brown, South Dakota with his sister Edna (b. Sep 1886 d. ?) Roy and Edna appear to have never married. Rose nee' Krueger was married to Walter Oertli, and appears to have been a cousin-in-law (but I didn't find the exact linkage between Walter and Roy). Rose was Martha's sister.In the 1920 US Census, Martha Margaret Krueger Nack (Mar. 30, 1883 - Jun. 11, 1971) is listed as a nextdoor neighbor to Rose and Walter Oertli, living in Eldred, Cass, North Dakota.