This sweet photo made it back home. 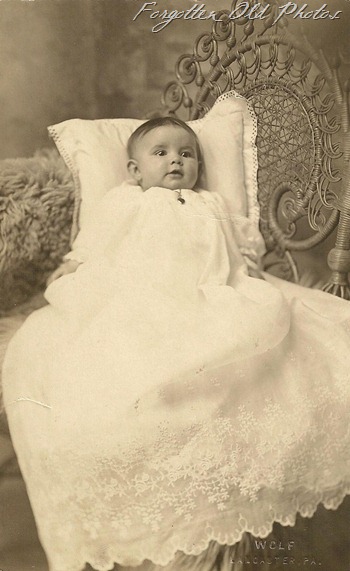 Photo Number 1218
Iggy found me an address for Marie’s son John and I mailed off a copy of the blog post.
Dear Connie, your letter with my mother's picture was a surprise. My wife and I have the photo that this postcard displays. If you notice in the picture there is a locket that my mother is wearing, it is now my daughter's. My mother's mother (Annie) was from Gully which is near Fosston and Bemidji, so the fact that you found it in northern MN is not surprising. I would appreciate the postcard and will send you a donation via snail-mail. As far as my mother's history she was born in Lancaster Pa. At the age of 6 she had polio and was crippled. My Grandfather (Charles W. Myers) worked with her physically until she was 18 to get her out of her braces. She worked for the Hamilon Watch Co. (near her home) for a while until she married my father in 1939. I was born in Lancaster in 1947. As the years went by she needed to use crutches and eventually a battery operated chair. She was able to drive most of her life until the age of 60 and died peacefully at the age of 88 in 2004. That's about it except for the fact that she was a good cook especially made great cakes and pies and the best rice pudding I've ever eaten. Thank You, John
Thanks for stopping by.  Do come again:)
Posted by Far Side of Fifty at 4:02 AM