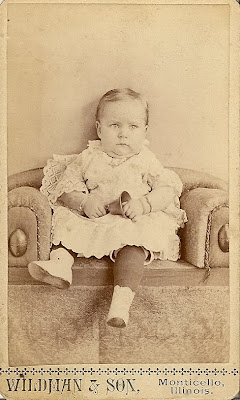 Since this is forgotten old photos..we don't know who the child in this photo is. If we are to follow the hair rules..a part on the side would indicate a boy.  This must have been a special chair in which children were photographed.  This small child has bracelets on both arms and is holding a bell.  I will guess that this photo is from the 1880's.
Thanks for stopping by,  do come again:)
Posted by Far Side of Fifty at 10:32 AM