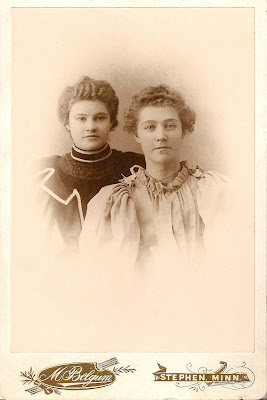 This is a cabinet card, on the back it is marked. Nellie and Mae McMahan.  The photographer was M. Belgum of Stephen, Minnesota.   The Minnesota Historical Society has a list of Minnesota Photographers, I use it to date some of the photos that I have found.  I found a M M  Bergum who was in Stephen from 1898 to 1899.  It must be a case of a misspelled name, an R is really an L.    This photographer was an unknown..even to them.  I sent them a copy of this photo and I received this back.

Hi Connie,
Thanks for your note and question about this photographer.  It's always fun to hear how people are using our Photographers' database. I checked our records and don't see that we have any images in our collection by either Belgum or Bergum. We also don't have a photographer's file for either name. My hunch is that you are correct in guessing they are one and same photographer, by the name of Belgum.
I did some census research and found an M. Belgum in Warren, MN, age 20, in the 1895 State Census. By the 1900 US Federal Census, M. Belgum, identifying himself as a photographer, is living in Cooperstown, Griggs County, North Dakota. At that time, he gives his birth date as July, 1867 and age 32. He was born in Norway and immigrated to the US in 1892. In 1910, he's living in New Rockford, Eddy County, North Dakota, still single and gives his age as 46 (now shows his birth date 'abt 1864'). He still identifies his occupation as 'photographer'!  So, I think you can say, with some certainty that our database needs correction and your cabinet card was made by a photographer who made a good, long profession of it.
Diane ( Curator)

So I will still date this photo 1898 to 1899.  I wonder what happened to the McMahan girls..this photo must have been taken before either of them married.

Thanks for stopping, do come again:)
Update from Abra:


I found a lot of information over the last two days, but still can’t connect these two ladies to anyone living. There seem to be many childless marriages, late in life marriages, or unmarried in the succeeding generations. For now, here is what I know:

I’ve mostly tracked the girls marriages, but since I haven’t yet found any heirs in their lines, I will need to do more on the brothers’ lines. Bertha married John R Walters on 4-8-1886 and had one daughter, Theresa. Theresa would later marry William Lyon. At age 42, in the 1930 census, Theresa had still not borne children. They lived in Crookston. I could not find death date for Bertha.

Cora Elizabeth McMahan was the next to marry, on 10-31-1901, to James Jacob Peters. In 1905, they are living in Stephen, and her husband is a barber. In 1910, they are living in Ramsey County and are listed in two different census sheets, taken 10 days apart. They may have been in the process of moving, as the children are the same, but one location lists one boarder (possibly Lexington Ave—hard to read), and the next location(Winifred St.) lists 3 boarders. “Jacob” is listed an insurance agent in both. The children are: Dale (3), Dorothy (2), Thomas (9-10 mos). In 1920, the family is living in Shelly, Norman County. Jacob is a barber again. Dale is no longer listed in the family (There is a Dale Peters listed in MN Death index for Feb 28, 1912 in Marshall County, no age listed, but I assume it is him): Dorothy (13), Tommy (11), Lyle (7), Thessie (3). By 1930, the family has moved to Greenbush, Roseau Co., MN. Jacob is a pool hall proprietor. Dorothy is no longer listed. (I did a lot of searching, with a possible late-in-life marriage, so I’m thinking no heirs from her). Thomas, 20, is a helper in the pool hall, Lyle is 17, and Tessie is 13. I could find no concrete information that Thomas was ever married or had children, Lyle was never married, and still working on a couple leads for Tessie, so it may be possible that she has heirs.

I still need to do some searching on Mae & Nellie’s brothers. I guess since it has been easy to find this family, but hard to find heirs, this might help explain why the photos became forgotten old photos.
Posted by Far Side of Fifty at 11:29 AM