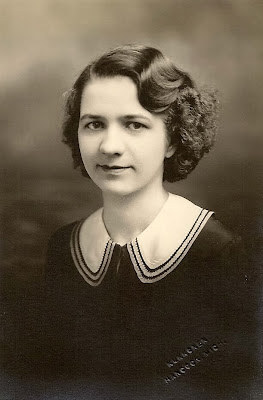 This is another photo that I purchased at Aunt Ellie's Attic in Bemidji, Minnesota.  It is a real photo postcard, it is an Azo that has squares in the corners where the stamp goes so it is from 1925 to 1940.  I will guess that it is from the late 1930's.

Sometimes the photographers are as interesting as the people.  Charles A Kukkonen came from Finland to America in 1903.  He learned to speak English and to take photographs.  In 1912 he opened his own studio.  He was well known in the Hancock, Michigan area.   His studio was continued by his son Carl until 1990.
Thanks for stopping by, do come again:)
Posted by Far Side of Fifty at 2:07 PM