May 03, 2010
A few weeks ago, I obtained a phone number for Bob. So I called him up!   He lives in Nebraska. He is in his eighties, he never married.  His sister Joyce is still living in Norfolk, Nebraska.  She suffered a small stroke the week that I talked to Bob, he said that she should recover completely.  Bob was a Cattle Feeder his whole life, and never found anyone that he liked well enough to marry.

He told me a story about three brothers that settled in Fremont, Nebraska, one wasn't married.  The brothers all went to the United Brethren Methodist Church which is now the United Methodist Church.  Anyways, the presiding elder at the church suggested that the bachelor visit a family with six daughters at Hoskins.  So the bachelor went a calling with a team and a wagon at dinner time one night, picked one out and they were married the next day.   They lived together for years, then the wife died and he required some care so Bob's Mother cared for him, one day he up and died.  Bob said "He died from loneliness, he loved her so much."

Bob has lived in Stanton, Nebraska all his life.  He talked my ear off, he said  "This is the weirdest phone call I have ever got in my entire life."   He said, that yes I could mail him the photographs that he would give them to his sister, he himself didn't have much use for them, perhaps his niece would like them.

I was correct in my assumption and so was Abra, he is related to the Vogues and to the Meirherys that live here in Minnesota at Deer Creek.  He said he thinks his cousin Marlys lives in Park Rapids, which is very near me..but he cannot remember her last name.   He also said that Fred Vogue was an avid photographer.

With nothing else happening with these photos I declare them full circle.
Thanks for stopping by, do come again:)
November 30 2017.  I received news today that Bob died on November 27 2017.
His friend Ed shared this photo with me.  Rest In Peace Bob 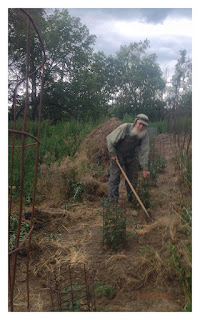 A Celebration of Life for Robert W. Freiberg, 94, of Stanton, will be 2:00 p.m., Saturday, December 2, 2017, at the Stanton United Methodist Church. Reverend Lydia Dayton will officiate. Burial will be in the Stanton Cemetery. Visitation will be Saturday, from 12:30 p.m. till service time at the church. Home for Funerals of Norfolk is in charge of arrangements.
Mr. Freiberg passed on Monday, November 27, 2017, at the Stanton Health Center.
Robert was born on June 7, 1923, in Stanton, the son of William and Lucille (Voge) Freiberg. He attended rural school before graduating from Stanton High School. Following his education, Robert returned to the family farm, which was homesteaded by his parents.  He became a true Steward of the land while it was under his care.
Although he loved farming, Robert’s greatest passion was fishing. He delighted in teaching his niece and nephew how to fish. He took every opportunity, year-round, to go fishing. Robert enjoyed all of his friends that partook in the sport he enjoyed so much.
He not only cared for the land, he also took care of his mother following the death of his father.
Robert is survived by his sister, Joyce Meilike, of Lincoln, NE; his niece, Linda Meilike, of Papillion, NE; his great niece, Heather Buss and his great nephew, Garrett Buss.
He was preceded in death by his parents, a brother-in-law, Don Meilike, and one nephew, Mark Meilike.
Posted by Far Side of Fifty at 7:30 AM