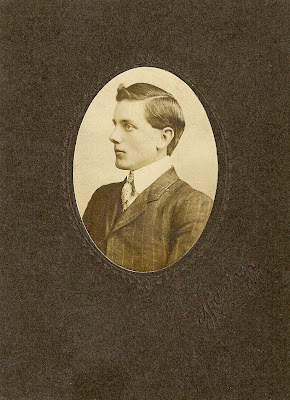 Joseph Francis  Grennan 1887-?
This is Joe, his last name looks like Grennan or maybe Gremran or Gremnan.  I tried to scan it but the photo backing is dark and  did not scan well..I had to hold the photo to the light to read it. I believe that we have had this type of photo before..the oval glued onto the photo card.  This photo was taken at Haynes in Sterling, ILL.  I will guess around 1910.
Thanks for stopping by!  Do come again:)
*** Update from Abra:  The name is Grennan. He was living at 606 W 6th ST in Sterling when he registered for the WWI draft. He was born Sept 18, 1887, and he was 29, married & had 3 children when he registered. He was of medium height, heavy build, gray eyes, black hair, & his left arm was off at shoulder. (The rest of the info is blurry & hard to read.) In 1900 he was living Hahanaman & Montmorency Twshps (Whiteside Co. ILL), along with parents Michael(53) & Bridget(42). There are 10 children in the family, ranging in ages from 3 to 23. Also, Thomas Murphy & Frank Fox, but I forgot to check relationships on them. In 1910, the family is living in Sterling (same county), there are only 3 children, with Joseph being 22, & Annie 20, & Katharyn 13. There should have still been 2 others at home (17 & 15), so either they are boarding or they have passed on in that 10 years. (I might be able to find more by searching family trees, but I won't have time right now). In 1920, Joseph is still in Sterling, age 32, and has five children. In 1930, he has 6 children and is living in Amboy, Lee county, Ill. (Della from picture 70 was also born/resided in Lee County--her pic, btw, is now posted with her info in her family tree). I could not find a relationship between Della & Joseph, but I think there must be some common thread between these, due to the residency counties. Perhaps Jinglebob has an idea on this.


Update: Jan 21, 2010
I spoke with a gal by the name of Kay,   she lives in Springfield, IL  Joe in photo number seventy-eight is her cousin ( Thrice removed..but still a cousin) ..she was thrilled to find the photo..I will mail it off tomorrow.. another photo headed home!! She has assured me if she finds anything else out about Joe or perhaps how he lost his arm that she will leave a comment here:) Connie


Update: Feb 10, 2010  I received a note from Kay thanking me for the photo.  ( No news on the arm yet.) She also included a small check to defer the cost of postage.   So I cashed the check and promptly went to the Antique Shop and purchased a few more old photos with names on the back!


Update: May03, 2010  Abra sent me an email saying that Joe's photo has now appeared on the Ancestry site.     So this photo goes full circle today!
Thanks for stopping by, do come again:)
Posted by Far Side of Fifty at 11:28 AM