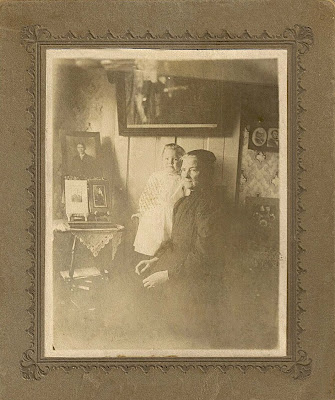 This is a photo that I purchased in a small Antique Shop in Motley, Minnesota.  This photo tells many stories.  A Grandmother (I think she is too old to be the Mother)  and a Granddaughter.  The photos to the left are perched upon a photo album, they appear to be a man and a woman and a larger photo of a young man.  Is it a sad story?  Is the largest photo..her husband..or son..perhaps the older woman is in mourning.

Behind her and to the right is a photo of Abraham Lincoln and some other politician..perhaps Johnson..
The wall paper is pretty wild..I found this photo very interesting..what story do you think it tells?
Thanks for stopping by, do come again:)
Update from Norkio:
Yes, that is Andrew Johnson in the photo with Lincoln. He became president after Lincoln was killed. This tells us the lady is likely a Republican/Whig or supporter of the Union, and therefore most likely from a "northern" state. It looks as though they are posed in front of a door, although the large framed picture (?) or mirror (?) above them is perplexing. The woman's clothing is 1870s-1880s.
Posted by Far Side of Fifty at 12:00 PM