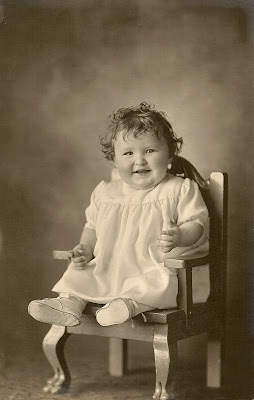 This chubby little one made me smile, he or she is obviously a happy baby..I think perhaps it is a little girl..but you never really know.. years ago they dressed both boys and girls pretty much the same.  Possibly this is taken around 1925 or 1930?    It is a normal photo ( after 1920)  mounted in a heavy duty brown folder, without a frame.


Smiles were absent: I have been doing a little reading..about exposure times..some times the "sitter"  would be braced in place.  Movement caused a blurry photograph.  People are not smiling because they couldn't hold the smile for as long as the exposure took, and the Art of Dentistry was sadly lacking in the late 1800's and the early 1900's.  So far I have found one reference to a twenty second exposure at a minimum, with thirty seconds being common ..and some older photographic equipment taking up to a minute and a half.. someone said that people took sitting for a picture very seriously..it was a matter of pride..and it was a special occasion, one that you made an appointment for and were very nervous about:)
Posted by Far Side of Fifty at 10:42 PM