Lets look at some cars!  Any and all input is appreciated.  My Dad is pretty good at identifying old cars for me. 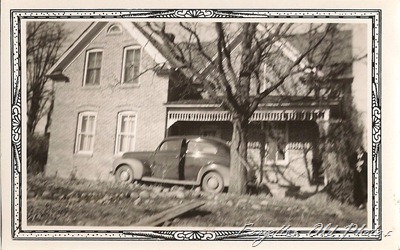 He thinks that this one is 1937 or 1938 Ford.  They made a model called The Sixty Ford.
This photo is marked on the back, Arrow Photo Service Minneapolis, Minn.  A house and a car..the American dream!

Thanks for stopping by, do come again:)
Update from Futura:
It is a '38 ford....from 1937 thru 1940 Ford marketed a car called the "Thrifty Sixty" because it featured a smaller, 60 horsepower version of its famed V8....the car was terribly underpowered yet delivered excellent fuel economy...The majority of Ford customers however opted to pay a few dollars more for the DeLuxe model that came equipped with a lively 85 horsepower engine.
Posted by Far Side of Fifty at 4:02 AM