This is a CdV from the antique shop in Dorset Minnesota. 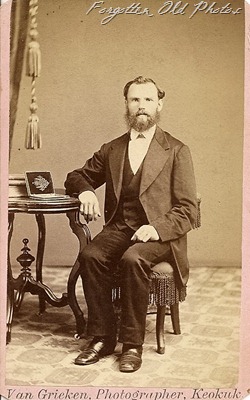 I thought at first glace that this was a foreign photo.  I was wrong.  This CdV has a pink backing.  Samuel Van Grieken was the photographer in Keokuk Iowa.

Samuel Van Grieken was born in Holland in 1840 and came to America with his Grandparents in 1845.  He was an orphan.  While in New York City his Grandfather died.  When he was 13 years old he and his Grandmother moved to Keokuk Iowa..and he remained there throughout his life. He died in 1893.

We do not know the name of the gentleman in the photo. I would guess that those were not his pants from the look of the thick hem. The vest is often called a waistcoat..I guess because it covers you to the waist.  In this case it appears to be a double breasted waistcoat or vest.