This is another of Tulla’s photos from an antique shop. 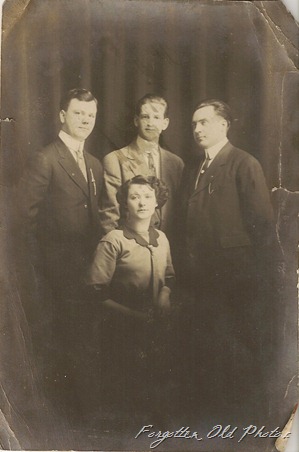 I did find a Susan A Noyes who was the wife of William H Noyes who were both 60 years old in the 1910 Census in Sawyer County Wisconsin in the Village of Winter.  William H was a Newspaper Editor.   They had two children Edna “Irene” and Thomas.  This could be one or the other of them with their spouse and children. I am curious if one of them had two sons?  ( She had five grandchildren.)  If Susan wanted the photo returned to her apparently it was important to her, however it could have been a next door neighbor..who knows?  Susan died in 1934.


Irene Edna Noyes (b. 15-Jun-1887 Prineghar, Iowa d. 7-Jan-1942 in Monterey, California) married George Adelbert Walter on 27-Jun-1906 in Birchwood, Washburn, Wisconsin)They had seven children - some showing as still living.
Posted by Far Side of Fifty at 4:04 AM