This is a Cabinet Card from the antique shop in Fergus Falls Minnesota. 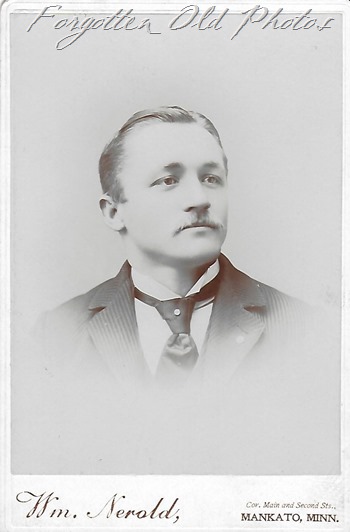 Wm Nerold was the photographer at Cor Main and Second St Mankato Minn
The Minnesota Historical Society says that he was at 101 North Second in 1895…it may be the same address…or it may be an earlier or later location.

August Ziemann
Thanks for stopping by.
A possibility from MJM:
Since there are several men by that name it is hard to pin down the right one. None showed up on census records in counties around Mankato. But I did find an August F. Ziemann marriage record that occurred in Blue Earth County in 1904. The bride was Anna V. Butzer. On the marriage record he listed his place of residence as Chippewa County, while hers was Blue Earth County. That couple is found in 1910 living in Chippewa County, and 1920, 1930, 1940 in Amity, Bottineau County, ND. There were two children Elenora and Walter. Maybe the August in the photo?
Posted by Far Side of Fifty at 2:02 AM