This is a photo from the antique shop in Fergus Falls Minnesota. The photo is very glossy so it was difficult to scan….it almost looks like a painting. 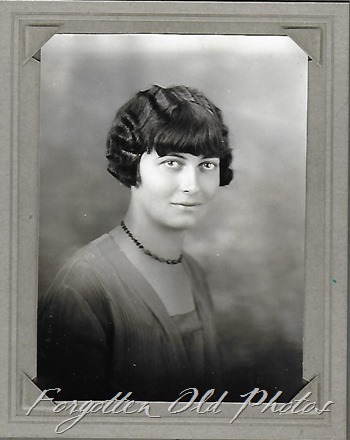 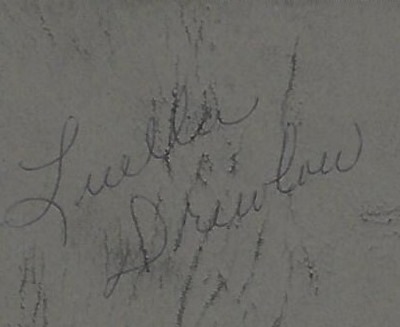 Update from Iggy:
In 1940 Luella is found in the census working as a maid in Breckenridge MN. She was born about 1911 and her maiden name was most likely Arntson.Apparently she married George Drewlow. They had many children; Patricia, John, Annetta, Kayleen, Dennis, Meryl, Grace, Donna,Loretta, LaVern, Janice, James, Kenneth and Marlin.Luella was still alive in 2013 when her daughter Patricia died.

Update from a Relative:
The Luella Drewlow in the 1940 census, is NOT the Luella Drewlow who married George Drewlow. Luella & George weren't married until 1942, so she would have still been Luella Arntson at the time of the 1940 census. Also, the Luella Drewlow married to George Drewlow was born in 1922 and would have only been 18 (almost 19) at the time of the 1940 census. I know this information because she was my Grandmother.However, that signature definitely looks like my Grandmother's handwriting (I was always envious of that "L". And when I compare the picture to her wedding portrait, it certainly could be her. The eyes, nose, and chin look similar. The hair style is just so vastly different from any pictures I have of her (only a couple from when she was a little girl, and then pictures of her after she married). However, my mom wore the same hairstyle in her graduation pictures and she says my Grandma did her hair for those pictures.I had one of my brothers show this picture to my Mom and she says that it is most likely her mom (my grandma). She is quite certain that the signature is my Grandma's.