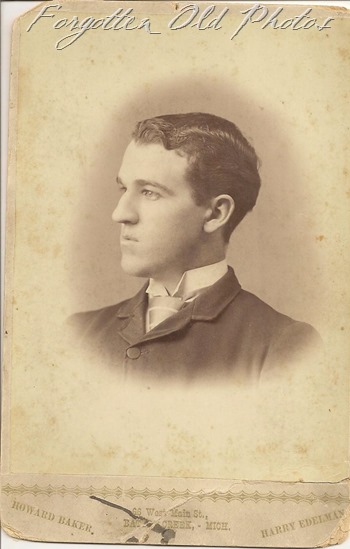 William Martin Doty has an orphaned photo on your site, number 1507. He is my father's maternal grandfather. He was a good-looking guy for his time. I think that my dad had his nose. . I have my dad's nose. Lol

Interesting that you live in rural MN. I was born and raised in St Paul, MN. Most of my seven siblings still live there. Me in Wisconsin, a brother in MD, and one in CA, are the only ones that are not still in MN. My dad grew up in Battle Creek, MI, and my best friend in college was from there too, coincidentally.
My mom was born and raised in St Paul, herself. Do you happen to have any idea where this photo was found? A flea market or garage sale? The Dotys were really (in that branch) concentrated in Indiana and that family only, in So-Central Michigan. My grandpa, Lila Doty's husband George Griffin, was "adopted" (taken from his mother and given to a farm family) in 1885. We just in the last six months finally got DNA confirmation of his birth father, a Westmoreland. It was a newly discovered, third cousin from the Westmorelands, that shared the link to the picture. Thanks so much for listing it!
Millie

Hi Millie, I will find the photo and get it off in the mail in the next few days.

It was purchased at an antique shop in California.   A fellow named Craig got tired of searching for relatives so he mailed a bunch of photos to me.

Thank you for sharing a bit of the family history.  I will include that info in the Full Circle post I write after you have received the photo.  Please let me know when it has arrived!  Connie

I finally got the photo in the mail, I had company and was really busy.

( I commented that I thought William Doty was very handsome! )

Willie Martin Doty is pictures in the photo you just sent me, and I really appreciate it! He was my father's mother's father. He was indeed a good looking guy. His distinctive looking "Roman nose", as my mom always called that aristocratic English nose of his, with the bump maybe halfway down the bridge, has been passed on to many of us. I am the seventh of eight kids. Not one of us looks "just like" the other, but five of us have that distinctive nose. LOL.
I also plan to scan it and make copies for one cousin, and for a cousin's "grand-daughter-in-law". I love that you have located descendants for so many people pictured in these old, orphaned photographs! Another interesting fact about William Martin Doty pictured here in about 1885, is that his son Verner Doty (my dad's great-uncle) ended up becoming a professional photographer of some accomplishment, in the 1920s and 30s in Battle Creek, Michigan, where this photo was taken. It makes me wonder if he had this very copy in his possession at some point!
Millie
(Daughter of Russell Griffin, who was son of Lila Doty and George Griffin, with Lila Doty being the daughter of "Willie" Doty)

I also emailed a copy of this photo to another relative.

I emailed her a copy and asked if Millie was a cousin?

I appreciate the copies! Yes, Millie is a cousin.

So this was  kind of a double Full Circle!