This Full Circle began from an email. 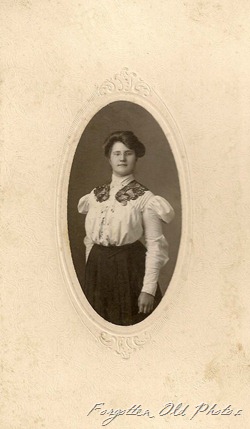 I was led to your blog by a distant cousin, and I spent several hours today looking through all of your photos.

Your photo 260 of Anna Maria Dreis is my 1st cousin once removed. If no one else has requested the photo, I would be delighted to "claim" her. Her mother, Mary Elizabeth Leifeld Bauer was my grandmother's sister.

I have been doing genealogy for over 30 years and have many family books in progress at this time.

I cherish all old photos, and it is so very wonderful that you are adopting all these old photos, and making such efforts to find homes for them....I wish you much success.

I have a few photos from my fathers things that have no names attached...do you accept photos from other people? I can scan them or mail them to you...if you are willing to add them to your lists.

My grandparents lived most of their married lives in Wadena, and my grandmother, Magdalena Leifeld Richter was born in New Trier. My father was raised in Wadena, and my parents lived in Wadena for about 8 years before moving to Wisconsin in 1929 or 1930. I noticed a picture in your old cars section, where there were suitcases strapped on the back of the car, and you made mention of that fact. When my parents moved to Wisconsin, they had 3 children and they strapped their belongings on the back and running boards of their car. My dad tossed out a lit cigarette, and it landed in one of the boxes of pictures and started a fire...they had to stop along the road to put it out!!!! Unfortunately, many of the pictures were destroyed, and that is another reason that old photos are so precious to me.

If you do choose to send me the photo above, I will keep it available in case someone closer in relation would want it, I would be happy to send it to them.

Once again, thank you so much for what you are doing, and I hope to hear from you soon.

I  asked Kathleen about two other photos. 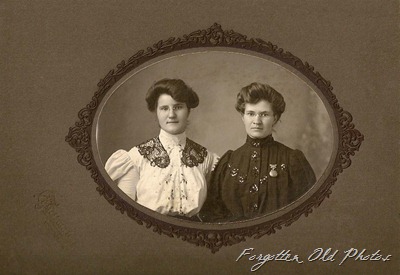 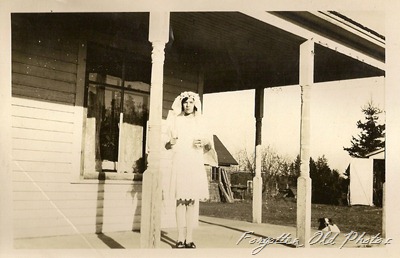 Thank you Connie...photo 261 I believe is Anna and her sister Mary, who was about 15 at the time. I have a photo of their mother around the same age, and there is a definite resemblance. Thank you for alerting me to another photo...I do believe this is part of the same family....they had many children, so I would be very happy to have all three of them if you would send them to me, and I will do research on the First Communion picture.

I mailed off the photos..since they were from 2010 I had to really search for the photos.  I told Kathleen that sometimes I get carried away when I look through the many “Forgottens” I have upstairs.

I received the three photos last week, and apologize for not acknowledging their receipt right away...I had grandchildren with me, and that doesn't leave a lot of time for my personal things.

Thank you so very much for sending them so quickly...especially when you had to search through so many "orphaned" photos. I am so delighted to be able to add all three of them to my Leifeld family book. Of course, I never knew Anna Marie Bauer Dries, but her aunt, Magdelena Leifeld Richter was my grandmother. I can give you some information about Anna from my research. She was born in Marshan Township, Dakota, MN on 5 Dec 1897 to Mary Elizabeth Leifeld and Peter John Bauer. She was the oldest of 8 children; 5 sisters and 2 brothers. She was raised on a farm and her family moved to Hampton Township in 1902. She moved to Hastings before she married John Frank Dries in Hastings, Dakota MN on 15 Nov 1933. John Dries was the oldest of 11 children...that must have been some great group when the two families met together!!

The second photo I believe is Anna and her sister Mary Ida Bauer...they were just 2 years apart in age.

The third photo is of Barbara Dries, who was a younger sister of John Dries, and eventually would have been Anna's sister-in-law. The photo is inscribed "to Katherine from Barbara Dries". There were several Katherine's in Barbara's life, but as I think her First Communion would have been around 1914-1915, I can't be sure which Katherine it might have been sent to.

As a side note, Barbara never married and died in 1959 and is buried at St. John's cemetery in Vermillion.

A distant cousin, sent me the link to your web site, and I am so grateful to him for sharing this with me. I don't know for sure how he found your site, but as we share the same Leifeld/Richter line, we share anytime we find something that might help us. He is very diligent and I feel so blessed to have him helping me...often finding things I would not have had time to research.

I will be checking back to your web site in the future...maybe you will unearth more of my ancestors! I will be sending the couple of photos I found in my father's things to you this week...and it would be so wonderful if you found a match for them.

Again, thank you so very much for what you are doing...a monumental undertaking, but one that is blessing many people. How wonderful that you have two gracious people who help you research those who have a little bit of information attached..they are special "angels" too.

Keep up the great work you do...and it makes me want to start rescuing those photos I find around my area!!

Tomorrow we will look at the photos that Kathleen sent to me.