This is a Postcard from the antique shop in Detroit Lakes Minnesota. 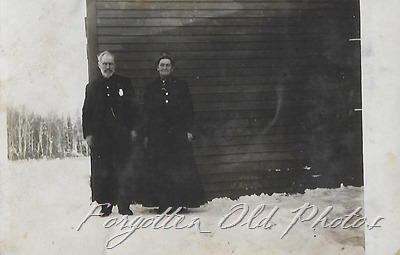 A couple standing out in the snow next to a building. 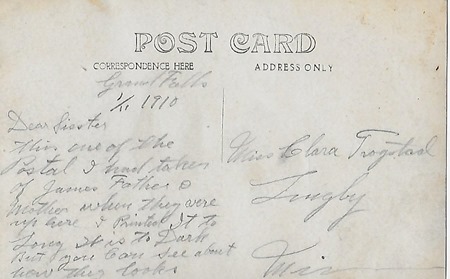 Grand  Falls 1/11 1910
Dear Sister, This one of the postal I had taken of James Father + Mother when they were up here. I printed it to long it is too dark but you can see about how they look.
It was sent to:
Miss Clara Trogstad Lengby Minn
Thanks for stopping by.
Update from MJM:
Clara Trogstad was born May 1894 in MN to Nels Olson Trogstad and Kari Olson. Her oldest sister was Gena Trogstad, born 1888, who married James Franklyn Daugherty. If I’ve found the right family, then “James Father & Mother” would be David Daugherty and Nancy Jane Mansfield.

Update from unknown
Wow!! It isn't David Daugherty, he died in 1888 or 1889, unless the picture was taken prior to his death. More likely, it is Nancy Mansfield and her second husband, Alexander McCrae. The details line up well. Clara Trogstad was 15 on the 1910 census, which shows her family in Columbia, Polk, Minnesota. The card was addressed to Lengby. Lengby is a city in the township of Columbia, in the County of Polk. The 1910 census shows James Franklyn, Gena, and Gena's brother Albert O living in Bear River, Koochiching, Minnesota. Bear River no longer exists, but was either a railroad access for logging or a logging camp south of International Falls. Grand Falls still exists as an unincorporated community 38 miles southwest of International Falls. On the 1910 census, James is shown as a section foreman for the railroad, and Albert is shown as a laborer for the railroad. (SIde note, the Minnesota and International Railroad was extended north from Bemidji to Northome in 1903 and finally reached International Falls in 1907. In 1900, James Franklyn was 14, and living with Nancy and Alexander in Beltrami, right along the extension of the railway)
Posted by Far Side of Fifty at 2:03 AM