This is a CdV from the antique shop in Fergus Falls Minnesota. 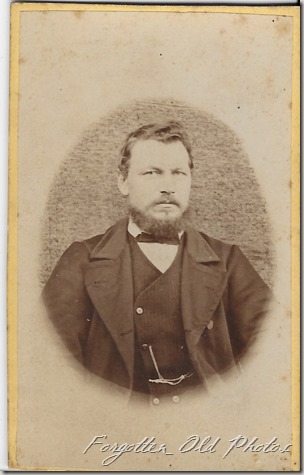 I believe it is a foreign CdV.

Perhaps Lars or someone else will be able to translate.
Thanks for stopping by.

Update from Dr Jeff:
An attempt: "Det ser bistert ud men forskrek(?) ikke Det lekkedes(?) ikke bedre denne gang"I think he says that he looks grim [in the photo], but the receiver should not be scared of his appearance. They were not able to take a better picture of him at that point.
Posted by Far Side of Fifty at 2:03 AM