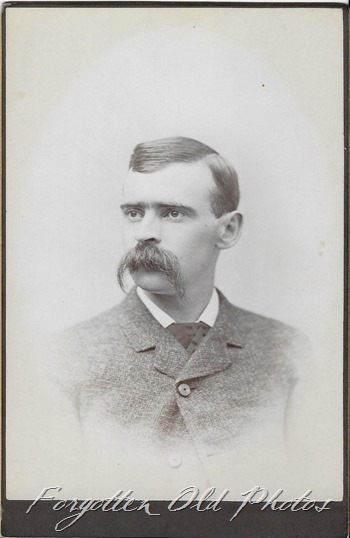 A young man with a big old handlebar moustache!  The top button is buttoned on his suit coat so I will guess this photo was taken about 1885. 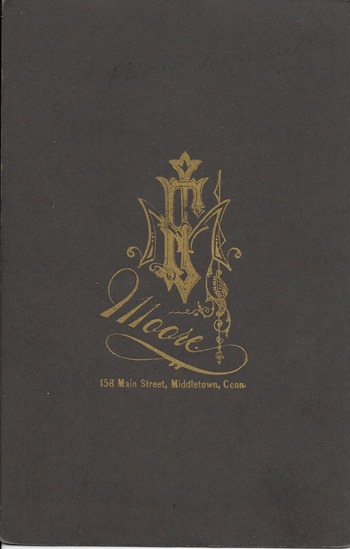 The name in pencil is hard to see it says Fred Allison.  The photographer was Moore at 158 Main Street Middletown, Conn
Thanks for stopping by.

Update from Jacqi:
I found Frederick Allison, born around 1853 in CT, living in the home of his parents in Middletown in both the 1860 and 1870 census enumerations. His parents were listed as Samuel S. and Frances A. Allison. He apparently also had several siblings.Interestingly enough, I also found a Frederick Allison of about the same age listed, later, in northern California. Since a lot of Craig's collection seems to link to people in California, I thought I'd check that out.The "1900 census" showed Fred P. Allison, born 1853 in CT, living in Jenny Lind, a small foothill community in Calaveras County in northern CA. Along with him were his wife, Kate, and two sons: 9 year old Greenfield S. Allison and 6 year old Philip L. Allison.Fred apparently died 28 Mar 1933 in Calaveras County. Kate, however, showed up in the 1940 census somewhere in the same county I live in, in a farming community called Linden. Although our county is somewhat of a genealogical black hole for popular commercial genealogy companies, our genealogical society has been active in helping gather records of use to researchers. Some of those have made their way on to FamilySearch.org, where our members made a concerted effort to help index them for online use.One entry, in particular, gleaned the details from "her Feb 17, 1942, obituary": "of Linden, blind."Another provided a digitized copy of "her death certificate", with the informant listed as "S. G. Allison," perhaps her son Greenfield. Interestingly enough, though the certificate shows her mother's name as "unknown," her father's name was Jacob Greenfield.I couldn't find any burial information for your guy Fred. Katherine, however, was possibly cremated, and the cert doesn't indicate where her cremains were left. Still, if it seems likely that the Fred in the photograph headed west with his bride from CT and ended up in Gold Rush territory (albeit quite late), then at least we have the starting point for a Full Circle story with the names of Fred's two sons.
Posted by Far Side of Fifty at 2:02 AM