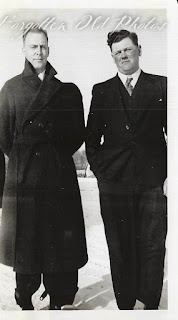 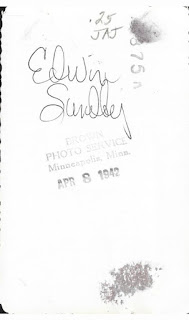 Edwin Sundby?  April 8 1942  Developed in Minneapolis Minn
Thanks for stopping by.
Update from Find A Grave:
October 04, 1962Edwin O. Sundby, Native of Hillsboro, Died Friday; Services Held on TuesdayFuneral services were conducted for Edwin O. Sundby, Tuesday, September 25, 1962, at Our Saviour's Lutheran church with Rev. C. F. Saveride officiating, with burial at the Arnegard cemetery west of Hillsboro.Pallbearers were: Clyde Larson, Conrad Elton, Kristian Haugerud, Victor Smith Carroll Borke and Kantan Nelson. Honorary pallbearers were: Joe Berkas, Clarence Hagen Alvin Muller, William Knzojed, Ole Moes, L. A. Thorstad, Tilman Lien, Lloyd Strom, Theodore Tygh and Jake Grable.Edwin O. Sundby was born July 24, 1908 at Cummings, ND, the son of Mr. and Mrs. John A. Sundby. He attended schools in Norway and Bloomfield townships and Hillsboro special school. He was confirmed at Our Saviour's church at Hillsboro, December, 1921.Mr. Sundby was engaged in farming until he entered the Army in WW11 and served from February 1942 to May 30, 1944, when he received his medical discharge from Moore General hospital in NC.He was married to Miss Cora DeVore of Galesburg on July 18, 1958, and they made their home in Hillsboro. He passed away September 21, 1962, at his home from a heart ailment.He is survived by his wife; two sisters, Agnus and Dina and a brother, Oscar. A brother, Albert passed away on September 10, 1952.
Posted by Far Side of Fifty at 2:00 AM