These are snapshots from the antique shop in Detroit Lakes Minnesota.  I am not sure if these are foreign photos or not. 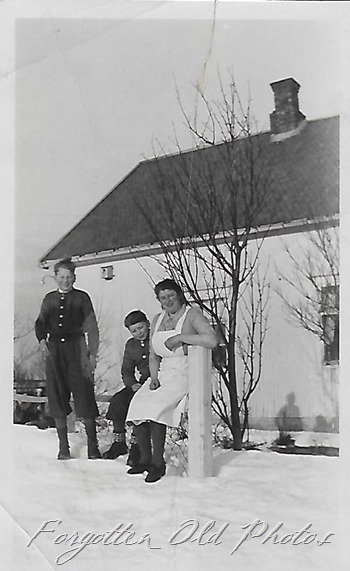 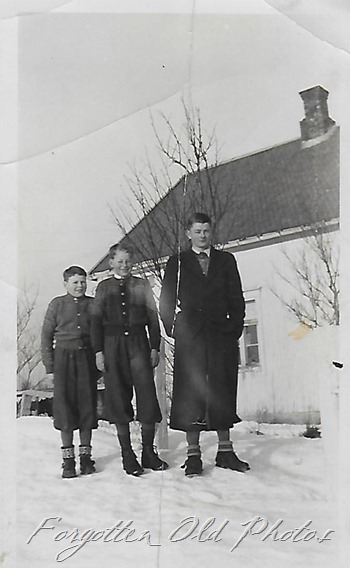 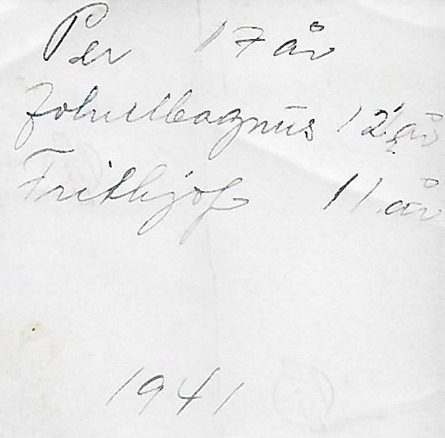 Per 17 ar
Johnrlleagnus John Magnus 12 ar
Frithjof 11 ar
1941
I welcome a translation.
Thanks for stopping by.
From LarsI
The first text is "Jeg og de yngste" (Norwegian), "Me and the youngest" (the two youngest on the second picture, I assume).The second name is "John Magnus", I think. År = year(s old).From the clothes and the house, this picture could have been taken in Norway.

I believe this could beMary Jensen, b. 12/3 1900 d 1967,Fritjof Jensen, b. 4/12 1930, John Magnus Jensen, b. 15/6 1929 d.15/5 2003Per Jensen, b. 18/5 1924, d. 1967.I found this information here, the second photo is a photo of the mother and the three sons.This website is about a "disappeared community", a community that had to be removed due to construction of a military airport in Bodø, Norway, in the fifties. The other photos at the page documents the movement of the house (Perheim), which I believe can be the same house as in this post.What happened to the father (dead? And/or sailor?) it doesn't say. How the pictures ended up in Minnesota is also intriguing (may be one of the boys moved?). It seems Frithjof was alive in 2013, he is also listed as a source for the web-site.
Posted by Far Side of Fifty at 3:02 AM