This Full Circle began when Karen left a comment on the blog. “Christian Milsten is a brother in law to my great uncle. Is this picture still available?  Thank you.” She contacted me by email and I mailed the photo to her. 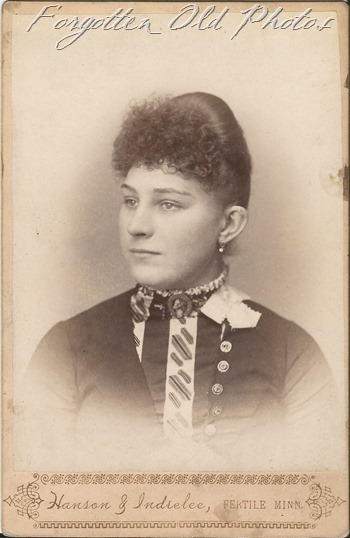 Mrs Chris Milsten  Photo Number 2002
I mailed the photo and Karen said she would get back to me with some family info.

Hi Connie:  I apologize for the delay in sending you info on Helene.   I have 2 relatives who married  sisters to Christian Milsten. Helene was married to Christian Milsten.  Christian was a brother in law to my 1st cousin, 2 times removed.  His name was Gunder Pladsen.  Gunder was married to Randine Milsten who is a younger sister of Christian.  We remain in touch with the Pladsen relative who now live by Watford City, ND.

Then my great uncle, Ole Aasen married Mari Milsten who was a younger sister of Christian's.  Ole was an uncle to my Dad.  They moved to Melfort, Saskatchwan.  Ole and Mari had 9 children.  We keep in touch with this branch of the family also.
According to Christian Milsten's obituary:  He was
a most highly respected citizen of Gary, MN.  He came to this country at the age of 21 and settled in Freeborn County.  He was married to Helena on 12/28/1876.  Helena and he moved to Norman County in 1880 where they settled on their homestead n the town of Strand.  They lived there for 10-12 years.  Then they bought a farm in Bear Park where lived for a few years.  Then they moved to Gary went into business.  Christian died before Helena.  They had no children.

That is a short summary of how Helena Hanson is related to us.  Thank you for the picture.
Karen

It is wonderful when relatives give us a little insight into their relatives lives!
Thanks for stopping by.