This is a CdV from the Flea Market in Wadena Minnesota. 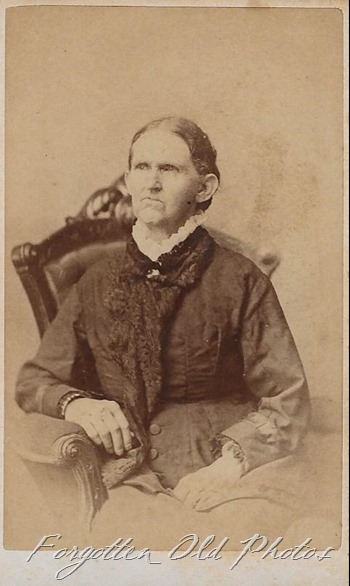 A elderly lady.  Since this is only a half to three quarters photo I will guess it is from the 1870’s.  Her hair also fits that time, however her gown is from the late 1860’s with the dropped shoulders.

J O Oleson of DeKalb, Ill was the photographer.

Mr. Oleson is a native of Norway, born in 1845. In 1868 he emigrated to the United States and located in Chicago, at which time he began business as a photographer. In 1872, after serving under the best photographers in Chicago, he opened an establishment on his own account, and was eminently successful. He continued his residence in Chicago for ten years, coming to De Kalb, in 1878, where he established himself in his business, and for sixteen years was the only permanent photographer in the city.