This is a Full Circle that began back in May.  Robert left a comment on my blog and from there he emailed me.

Hello Connie
I was excited to see photos of some of my ancestors from Sweden. E.G.O. Hoglund was my great grandfathers brother. I have been searching my Swedish family as my daughter is living and teaching there and I now have a Swedish grand daughter. It would be nice to take the photos to Sweden with me this July. Please let me know the cost to send them. Thanks in advance.
Rob 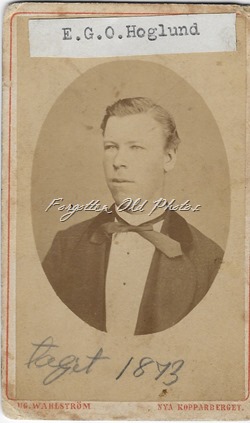 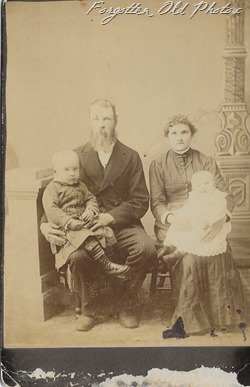 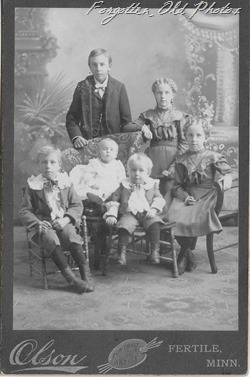 Photo Number 2077  The Erick Hoglund Children
I sent the photos off to Robert in Nova Scotia so he could take them to Sweden.
Then Robert discovered I had more photos of his family. 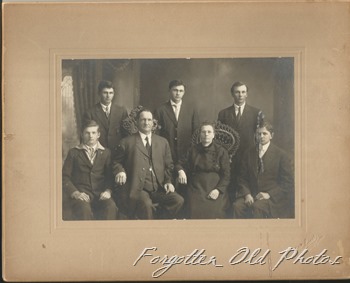 Photo Number 2056  Hans and Christina Johnson Family
Robert wrote:
My fathers dad died when my dad was 7 years old. He, his brother and mother went to Canada to be with his mothers family as she was born in Canada. Because of this we had very little contact with our American family. To now have pictures of some of our ancestors is awesome. Hans is my great grandmothers brother. Hans was born in Kallan (Transtrand) Sweden. In this photo are 5 boys. Hans and Christine had a girl also, but she died in 1894. Most likely in childbirth.
My daughter now lives in Sweden, is married and has a daughter born there. Another full circle.
Thanks Connie. 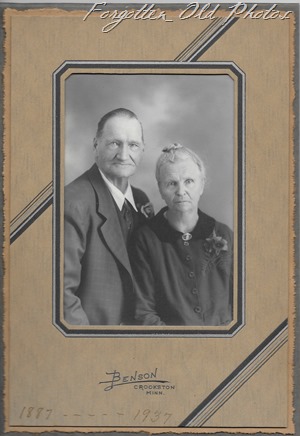 Hans and Christina Johnson  Photo Number 2058
Robert’s comment:
Small world. Hans Johnson/Johanson is my great grandmother Albertina Hoglund (Johnson) brother. Hans Johnson and Christine Stone (Steen) had six children. Hans was born in Transtrand Sweden May 10, 1860 by Swedish records. Hand written on information from the Hoglund family show he was born on May 13, 1860. I found Swedish records and family records sometimes don't match. Also there are name changes. Swedish records show Hanson as Hans and Christines children's surname. It can be a little confusing to trace family.
Thank you Connie for finding these photos. You have put faces to my ancestors. 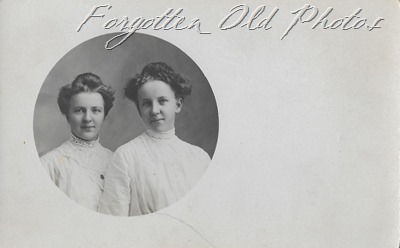 Olga and Tillie Hoglund Photo Number 2295
I knew when I saw this postcard that they were relatives of Erick Hoglund and lo and behold they were the little girls in the family photo. ( Photo Number 2077)

I took these photos to Sweden to show my daughters new Swedish in laws and they were very interested in the story of how they were found and of my family history. They really liked the one of Erick taken in Sweden. Thanks Connie. I have sent you correspondence by regular post.

I got a note in the mail from Robert:
Thank you so much for the photos of Hans Johnson and Family and Hans and Christine.  Hans is my Great Grandmothers brother.  Also the picture of Olga and Tillie (Matilda) who are daughters of Hans sister Christine Johnson (Hoglund).  Christine married my Great Grandfather Isaac Hoglund’s brother Erick Gustave Olson Hoglund and Isaac married her (Christine) sister Albertina Johnson (Hoglund) What a coincidence for you to have photos of both the Johnsons and the Hoglunds.
Sincerely Robert

Sometimes when photos are sold as part of an estate or someone doesn’t know what to do with the old photos they end up in antique shops.  Sometimes this is an intertwining family history…and I am more than happy to mail photos to relatives who appreciate them.  I know I would be thrilled to get a photo of my great grandparents!
Thanks for stopping by.