Sometimes when people are doing online research the run into a photo of their relatives…such is the case with this photo.  A message was left on the blog and I answered. 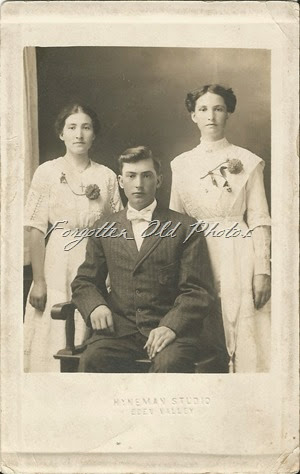 Theresia Keil (Hommerding) is my Great Grandmother and Margaret Keil (Hommerding) is her sister! They both married brothers. (I recognize their faces from my great parents' wedding photographs!) I was in the process of collecting photographs (on-line searches) of my ancestors and was excited to find this treasure!
Theresia Keil born 1 Jun 1886 in Luxemburg Township MN / married Math Hommerding 3 Sept 1911
Margaret Keil born 8 Aug 1899 / married Michael Hommerding 8 Sept 1915
Would you be able to send me this exact photo without "Forgotten Old Photos" on it? (The man in the photo could be my great grandfather Math Hommerding . . . however, he wore glasses.) I'm so excited !
Thanks! Sherri

I mailed the original postcard to Sherri.  She was kind enough to share a bit about her Great Grandmother!

Memories of Theresia Keil Hommerding contributed by Theresia’s youngest daughter: August 2014
(Theresia is the young woman on the right side of the photo.)

Theresia Keil was born June 1st 1886 on a farm in Saint Nickolas, Stearns County, Minnesota to John Georg and Louise Toenjes Keil.  She was the oldest of 8 children.  She married Math Hommerding on September 3, 1911.  She made her own wedding dress.  (She is wearing this dress in the real photo postcard: Photo Number 1579 -posted May 22, 2014)

Theresia Keil and Math Hommerding owned a farm just outside of Cold Spring, Stearns County, Minnesota.  They had 6 children but lost the 2nd child, George, when he was 5 months old. She had her 6th child, a daughter, a week before she turned 46 years old.
She was a very hard worker--very strict but also good hearted.
She would get up early to work on the farm.  She would go to the chicken coop with a lantern and later appear from behind the barn with a fork full of straw on her shoulder for the chickens’ nests.  She would then help her husband milk the cows.
She liked to sew, always making aprons on her treadle machine.  She would cut circles in pieces of material and put elastic around them which made them into caps.  She always wore these caps when she went outside.  She made a bedspread out of flour sacks and sewed them together with silk thread.  This spread is a treasured family heirloom.
When her youngest daughter was a teenager, Theresia, her husband Math and daughter left their farm and moved into town (Cold Spring, Minnesota).  When her youngest daughter worked at the town’s grocery store, Theresia would always make her daughter skirts and aprons to wear every day.
Theresia loved going to movies; she and her youngest daughter would go to a show every week.  They would walk to the movie house while, Math, would go play cards at a neighbor’s service station.
When Math took his wife and their youngest daughter shopping in Saint Cloud, the mother and daughter would always go to Kruger’s to enjoy a sundae.
During the latter years of her life, Theresia suffered from the effects of Alzheimer’s.  She passed away in 1960 at the age of 74 years.  (Her husband, Math Hommerding, passed away in 1987.  He lived to be almost 96 years old.)

Thanks Sherri!  I love it when we can learn more about the people in the old photos!