This is a Cabinet Card from the antique shop in Detroit Lakes Minnesota. 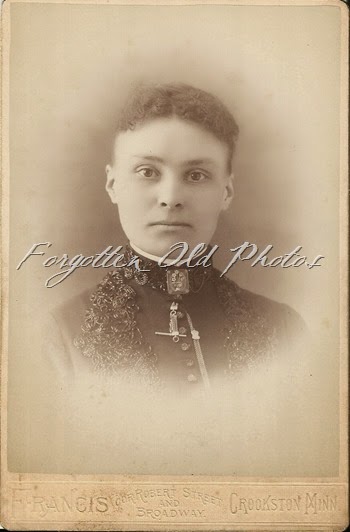 The photographer is Francis in Crookston Minn according to the Minnesota Historical Society Directory of Photographers he was in business in Crookston during 1885, 1888 and 1890.

Rena Ensby
Thanks for stopping by.  Do come again.
Update from Lars:
Oline from yesterday came from Øyer in Norway. The only place in Norway I can find a farm called Ensby is in Øyer. So that is a link to 1572... Øyer is not a very big community.In 1885, a girl called Rønnaug Ensby emigrated from Norway, destined for Crookston. The way Rønnaug is pronounced in Norwegian sounds a bit like Rena, so perhaps she simplified her name. It says there that she was 20 when she emigrated, but she might have been 30, as the only Rønnaug (Rønoug) I could find at Ensby in 1854 (1875 census).