This photo was returned to Maureen. 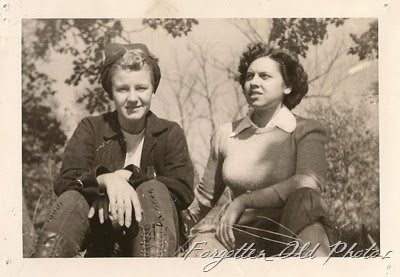 This is my aunt, Margaret Gertrude Garrahy. ( on the right)  She was born in 1922 and grew up in Fairfax, Minnesota. In 1946 she married Donald K. Williamson, and she passed away in 2009. My dad said he thought this photo was taken from around the time she worked in Detroit Lakes as a beautician. Unfortunately, he did not recognize the other woman in the photo.

I offered to send her the photo.

I will accept your offer for the photo. Yes, the person on the right is my aunt. Her son lives in the Twin Cities and I could reunite him with it - but I don't have his address offhand! I came across this photo through a last name search on the internet, and was actually surprised that a last name had been written down on the back of the photo. I also asked my dad if he recognized any of the other family names mentioned on that page but he did not. I wasn't too surprised by that as they seem to have been from much farther away. I hope you find the answer to that person's name, and again, I appreciate your offer.

Thanks so much. Maureen

Later she wrote that she had received the photo.