Sometimes Full Circles happen all by themselves.  Relatives will do a search and find a photo of their relatives.

That is what happened recently with Photo Number 663 that was published on September 23, 2011. 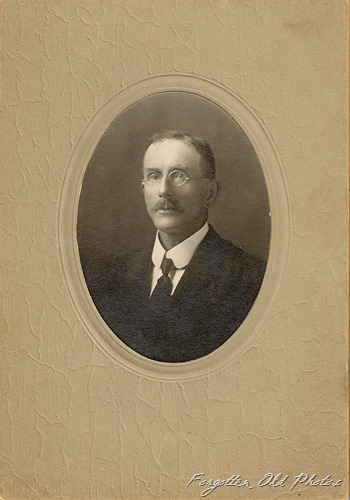 I recently found your website called Forgotten Photos. You have a photo labeled Olaus Emil Ubøe, he was my 1st cousin, twice removed. Would it be possible to purchase the photo of Olaus Emil Ubøe from you?

Olaus and Christian Uboe emigrated from Norway to Karlstad, Minnesota. Their education led them to become teachers. Olaus E. Uboe filed for a homestead in 1909 on S.W. 13-36-27 W2, east of Meacham. Later, Christian Martin Uboe came to Meacham and his homestead was NE 13-36-27 W2. Several years later, their sister (Emilie) came to live with them. Olaus, Christian, and their sister died here and were all buried in Minnesota.

I mailed her the photo and she has received it.  I do not charge for photos.  I return one photo to family free of charge, I consider it a kindness that perhaps they can pass along some day.  If they chose to reimburse me for postage that is great, some do and some do not.  Some people send more than the postage..then I turn around and purchase more photos.