This is a snapshot from the antique shop in Brainerd Minnesota. 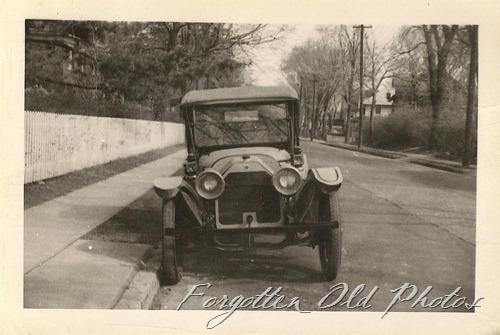 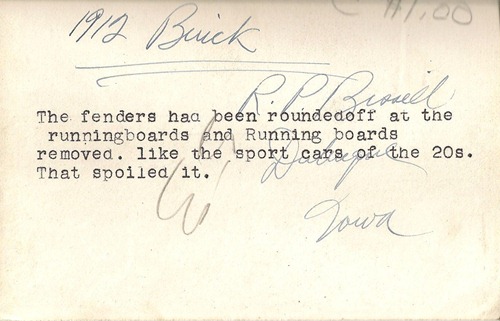 1912 Buick  R.P. Bissell Dubuque Iowa
The fenders have been rounded off at the running boards and running boards removed.  Like the sport cars of the 20s.  That spoiled it.
Thanks for stopping by.  Do come again:)
Update from Iggy:
Richard P. Bissell is a rather well-know author. Son of Fred and Edith Bissell."Richard P. Bissell (28 Jun 1913 - 1977) learned about the pleasures and dangers of towboating on the Mississippi during eight years as deckhand, mate, and pilot. A Harvard graduate, he left the river in 1945 to manage his family's business in Dubuque, Iowa, and to become an author of national acclaim."

Actually his birthday is June 27, 1913.Today is his 100th birthday....and I'm glad I found this so I can share it with my family!He was an was an author of short stories and novels. His early writings were stories and books based on his life working on the Mississippi, Monongahela, and Ohio Rivers, as a deckhand, mate, and Captain. His book, "7½ Cents", was based on his time spent working in the family business, H.B. Glover Co., in Dubuque, IA, which was turned into the Broadway musical "The Pajama Game", which won the 1955 Tony Award for Best Musical. He wrote a book about the experience called "Say, Darling", which chronicled a broadway musical production and featured characters based on those he worked with; this book was also turned into a musical with the same name, in 1958. In the 1960s, after other fictional books, he was hired by Holiday Magazine as a featured writer, which lead him to contributing to other travel magazines, as well. He wrote monthly columns for Venture Magazine as well as Travel and Leisure, which were based on his travels and were always humorous in nature.He passed away well before his time at the young age of 63. He was survived by his wife, 3 sons, and a daughter. Thanks for sharing this photo of one of my Dad's old automobiles!All my best-Sam Bissell
This photo went Full Circle 76 on November 12, 2013.
Posted by Far Side of Fifty at 4:02 AM