This is a Real Photo Postcard from the antique shop in Erhard Minnesota.  The postcard dates from 1904 to 1918. 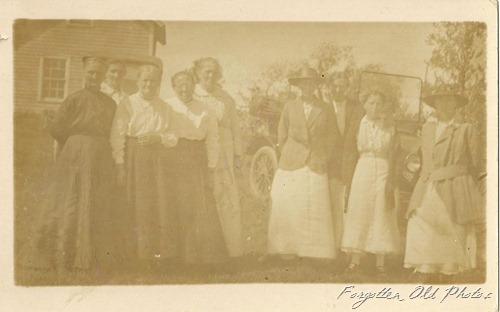 A group.  The travelers in the car must be on the right. City cousins come to see the relatives in the country! 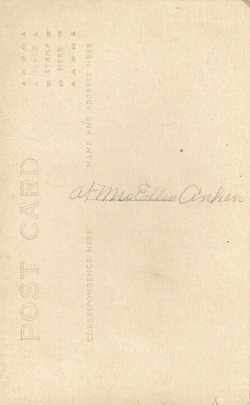 at Mrs. Ellen Ankers/Anhers
Thanks for stopping by.  Do come again:)

Update from The Norwegian Guy: Anonymous Hero
It is stated this item was purchased in Erhard, which is a small town in Otter Tail County, Minnesota. Also in Otter Tail County there is Clitherall Township, wherein there is a cemetery known as Leaf Mountain Cemetery. In that cemetery is buried Mrs. Ellen [nee Thompson] Anker. Ellen Anker [3/15/1851 - 3/1/1940] was the second wife of Iver Anker [1831 - 1907] who is also buried in Leaf Mountain Cemetery. The photo appears to have been taken in the early or middle part of the second decade of the twentieth-century. Since that was after Mr. Anker's death in 1907, it makes sense that the item was labeled as being taken at Mrs. Ellen Anker's place.