This is a snapshot from the first antique shop in Dorset Minnesota. 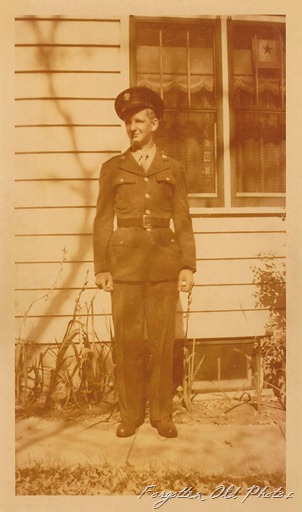 I think this soldier may be home on leave.  He also is most likely standing outside his parents house.  I see one Blue Star in the window.  He looks like he is in the Army.

The Blue Star Mothers was formed in 1942.  It was a group of mothers who supported each other and their service member children.  They put a small flag in the window..a blue star for each of their children serving in the armed forces.  A Gold Star was displayed for a son or daughter killed during the war.

This photo was dated May 4 1944.  The war would rage for another sixteen months.