This photo was returned to family in Norway some time ago.  I was looking back through my notes.  Liv in Norway was happy to receive it!  Gunnar Aarstad went home! 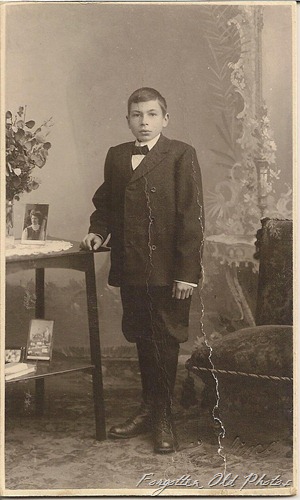 Update From Liv:Ole Olsen and Karine Nilsdatter Olsen have a son born 1859. His name is Nils Olsen.  He married Anette, they had three children Ole Carl Olsen/Aarstad, Gunnar Riis Olsen/ Aarstad b.1896( the boy in the picture) and Aggi Nanna Olsen Aarstad b 1901. That means Karine Nilsdatter is the Grandmother of this boy and my grandfather was his cousin. I have met his sister Aggi in Oslo many years ago.

Liv wrote:
Hello Connie ! Thanks a lot for mailing me the photo of Gunnar. He arrived safely, and he's so cute. I have tried to find him, but no success so far.

The minute I have some information on Gunnar, I will let you know.

Best regards, Liv.
Thanks for stopping by.  Do come again:)