This photo ended up in California. It found a home with Nora, Marion Wald’s niece. 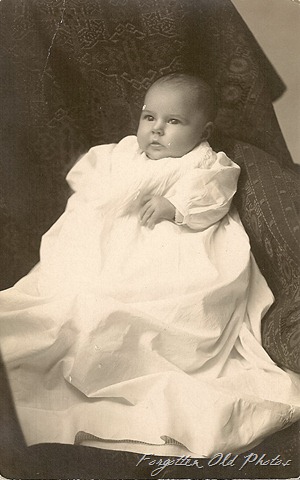 Thank you so much, it is GREAT to see this photo....wow. A blessing!

She also shared this info:

Marion Virginia Wald,  married Louis Migeot. As a young girl she acquired polio (apparently all the kids got it but recovered except Marion), so she often used braces, crutches or a wheelchair. She was an accomplished pianist and taught piano most of her adult life and loved it.

Marion was the eldest of four children.

I found that Marion's parents lived and married in Illinois; sometime after 1910 they moved to Canada, where they are in 1916; in 1917, Marion's father, Orlander, a physician, declared his intention to become a U.S. citizen while living in Los Angeles in 1917. He must have moved about a bit, because his 1927 request for naturalization states he applied in 1899 in Washington but then became naturalized in Canada, and that in 1925 he lived in Texas. We also know he lived in Los Angeles in 1920. So what I gather, he came from Norway, intended to become a citizen in Washington in 1899, probably moved to Illinois where he met & married Mary (who was born in Indiana), went on to have Marion in Illinois, then moved to Canada by 1913, where the two boys were born. he then became naturalized there, before moving to California by 1917 to declare intent. Youngest daughter Norma was born in Oregon (1924), then he was in Texas in 1925, then back in California by 1927. He was finally granted citizenship in 1931, and died in 1933. I found a small obituary, but it only listed first names of children and didn't give siblings.

Thanks once again to Iggy and Abra who found lots of info..and Nora just happened by..and was thrilled that she had the photo to take to her family reunion here in Minnesota.