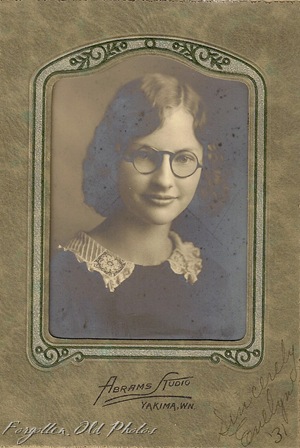 This graduation photo is from Sincerely, Evelyn ‘31.  The photographer was Abrams Studio in Yakima, WN. ( I never knew that the abbreviation for Washington was WN..I always thought it was WA. )
Anyway, Evelyn looks very smart in her dark glasses.
This photograph shows lots of silvering. The silver in the photographic process has come to the surface of the photo and can be very reflective. It seems to be very noticeable in photographs in the 1920’s and the 1930’s.
Thanks for stopping by, do come again:)
Update: I found this in my files it is the back of Evelyn’s Photo.

Apparently these are the people that received Evelyn’s photograph.  Mr and Mrs Albert Motl or Moll or ??


Based on another photograph showing the class of Holy Rosary in Yakima, Washington - I think this is Evelyn Rabie. There is a direct link to/from Yakima to Minnesota - the Northern Pacific Railrad - and many immigrants moved from MN to WA (or WN) "back in the day".
Posted by Far Side of Fifty at 4:18 AM