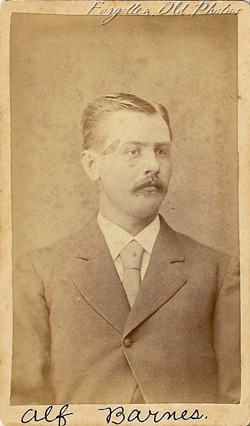 IF this is Alf Barnes..or Alfred Kimball Barnes he was born to Ida and John Barnes on May 10, 1881 in Ponca, Dixon, Nebraska.  He married Minnie Frickle and had two children, John Norman and Alfred Kimball Jr.   His second wife’s name was Ella Sinclair.

If he is twenty years old in this photo ..then it was taken in 1901.  It has no photographers marks. It is a CdV with rounded corners. I have some reservations about this photo..it looks much older than 1901..it looks to be very much like the photo of Aunt Fan at 17..which would place it at 1876…not 1901.  It could be that someone miss marked this photograph..it could be a young Bill Lister..??  For now we will go with it being Alf Barnes..with reservations.

There is a Vertical File Biography of some sort on file with the Colorado Historical Society..I have emailed them for the info they have on file..I have not heard back from them.
Iggy found the following info!  Thanks Iggy:)

Alfred K. Barnes began his education in the public schools of Ponca, Nebraska, but when he was seven years of age his parents removed to Norfolk, Nebraska, so that he became a pupil in the public schools of the latter place. He completed his more specifically literary course by graduation from the State University at Lincoln with the degree of Bachelor of Arts in 1902. He afterward pursued a two years' course in law in the State University and in 1907 was admitted to the bar, at which time he opened an office in Omaha, where he has since remained in active practice, and he is now counsel for the Peters Trust Company. He has always largely specialized in corporation law and his knowledge thereof is comprehensive and exact.
On the 1st of September, 1908, in Omaha, Mr. Barnes was united in marriage to Miss Minnie Fricke, a daughter of Herman Fricke. They now have two sons: John Herman, born February 15, 1911; and Alfred K., born July 6, 1914.
Politically Mr. Barnes has always been a stanch republican since age conferred upon him the right of franchise. Fraternally he is a chapter Mason and his religious belief is that of the Presbyterian church. He is a director of the Omaha Bar Association and his interests are of a nature that show him to be a broad-minded man of well balanced capacities and powers."


In the Mystery of Aunt Fan..Alf Barnes would be her nephew. Thanks for stopping by, do come again:)