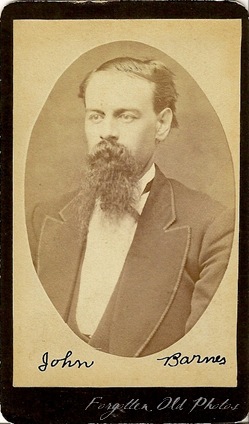 Meet John Barnes, he was married to Ida Hannant (Fans Sister).  John Beamont Barnes was born in 1846 and he died in 1921.  He and Ida had four sons, John Beamont Jr., Angusta, Guy and Alfred ( Alfred had two sons..John Norman and Alfred Jr.)
John Beamont Sr.  was a Justice in the Nebraska State Supreme Court System from 1904 to 1917.  In 1908 he was the Chief Justice of the Nebraska Supreme Court.  So he was a Lawyer, that is one wooly looking beard.
There is no photographers mark on this CdV.  It does have rounded corners..if he was 30 years old in this photo it would be from 1876…but that is just a guess on my part.
This family gets more interesting every day!  Tomorrow we will meet one of the Barnes children.  Thanks for stopping by, do come again:)